The last question we asked our newsletter subscribers in our first installment of the Rationality Checklist was about how frequently they asked for examples.

Here's what our survey takers reported: 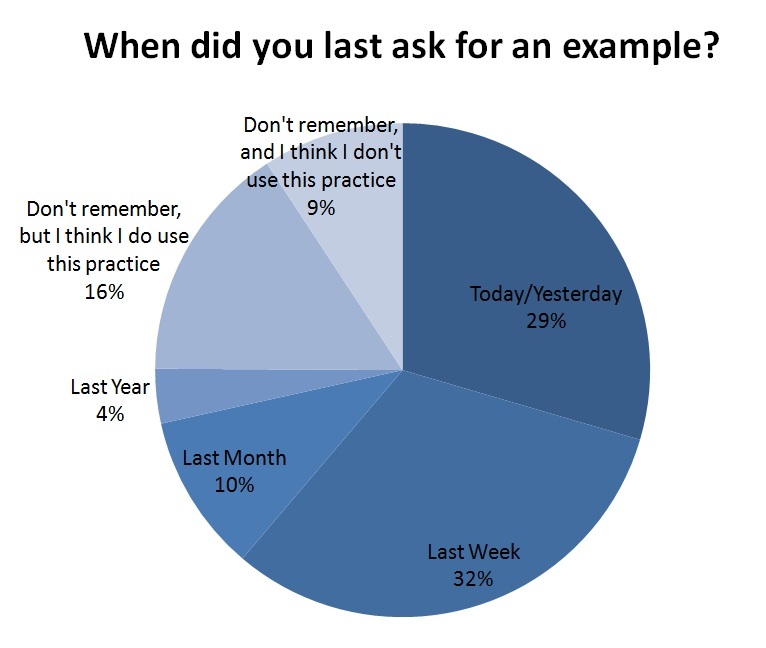 Ironically, when we asked you to give examples of how you used the skills on our Rationality Checklist, we got the fewest examples for the skill of asking for examples. So, here's one from me:

When I was talking to a friend about college classes that had made a big impact on me, I told him that taking Linear Algebra Theory had really improved my writing. He was confused, so he asked me for an example, and I explained that working through proofs each week and spending a couple hours mentally moving matrices had made it a lot easier to fall into the same mental pattern when writing essays and move arguments around in the paper. Before, it had been harder to keep the entire structure of a writing assignment in my head at once.

Sometimes, it can be hard to find a way to ask for examples without breaking the flow of a conversation, or you might not be in direct dialogue with a speaker (e.g. when reading a book or listening to a lecture). Instead, you can still generate private examples to make sure you've got a concrete understanding of what the other person is saying. As Richard Feynmann explains it:

I had a scheme, which I still use today when somebody is explaining something that I'm trying to understand: I keep making up examples. For instance, the mathematicians would come in with a terrific theorem, and they're all excited. As they're telling me the conditions of the theorem, I construct something which fits all the conditions. You know, you have a set (one ball) - disjoint (two halls). Then the balls turn colors, grow hairs, or whatever, in my head as they put more conditions on. Finally they state the theorem, which is some dumb thing about the ball which isn't true for my hairy green ball thing, so I say, "False!"

It's also really valuable to come up with negative examples. We're all vulnerable to the illusion of transparency, where we assume other people must understand everything we've left unspoken. If you just focus on matching your example to what the other person has said explicitly, you may be leaving out other important factors.

Imagine your friend asked you to set her up on a blind date and gave you a few examples of girls she found attractive (mostly short-haired, stocky girls). You kept trying to check that you had the right idea by giving examples that matched hers as closely as possible, but you might have made more progress by giving a few negative examples ("So, you wouldn't be into Blake Lively, right?") to make sure you weren't only talking about a subset of your friend's preferences or catching on to the wrong variable ("No, I meant I like girls who are into martial arts! I guess that's just what the girls in my class look like").

Asking for examples helps you have more accurate beliefs about the world, or at least to catch on quicker when you've made a mistake.