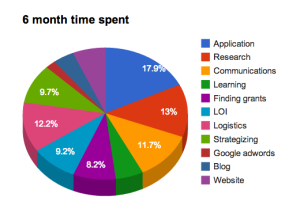 A graph of how Effective Fundraising spent their six months.

Effective Fundraising is a young nonprofit startup, a two-person team founded in 2013 to write grants for effective charities -- in other words, charities that have a demonstrably high positive effect on the world per dollar donated to them. EF chose The Humane League and the Against Malaria Foundation as their initial focus, and just posted their six month review of the fruits of their labors. In a nutshell, they sent out 25 applications and received zero grants, with the exception of a Google Adwords grant of free ads.

So why am I impressed? Because EF's experiment did so many things right. For example:

So hats off to you, EF -- you've done credit to the true but often-overlooked point that negative experiments can be just as valuable as positive ones. If only other organizations and people could fail as well as you.